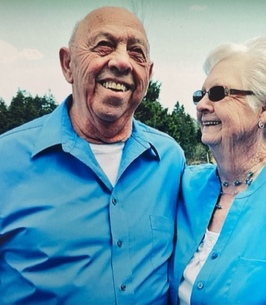 Carlton Harvey Grant, 87, of Jonesport, Maine passed away peacefully at his home on June 27, 2022. Carlton was born in Harrington, Maine on September 8th, 1934 to Owen and Grace Grant. He was predeceased by six sisters and five brothers: June, Corrine, Marie, Ethlyn, Carolyn, Marjorie, Lawrence (Dolly), Shirley, Kenneth, Irving, and Harold. Carlton was a character and will always be remembered as a kind man, and a storyteller with a great love for family and a strong work ethic. Carlton worked many jobs over the course of his lifetime, but will be most remembered for his wood and fish businesses.

Carlton finally wore down his love and for the first time in his life, at the age of 72, left bachelorhood behind. He married Mavis Stubbs, of Jonesport, on October 14, 2006, gaining a family of his own in her children, completing his life. He found a new lease on life with Mavis, her children, and grandchildren, who got the biggest kick out of him and his antics. Carlton loved to joke and rarely spent a day unhappy. Traveling up and down Washington and Hancock Counties peddling fish or delivering wood, Carlton made friends everywhere he went. He always had a story and a laugh to share. He was an avid fan of the Red Sox and Celtics, as well as local sports teams. He could often be seen sitting in the front row of a good local basketball game.

Carlton had many friends, family, and loved ones. He always held a special place in his heart for his niece, Holly Moore-Leighton, of Brookfield, N.H. and his nephew, Toodie Dinsmore, of Milbridge.

Service arrangements will be announced at a later date.

All rights reserved. This obituary is also archived at obittree.com