To share your memory on the wall of Gregory Schors, sign in using one of the following options:

Gregory Stephen Schors of Machiasport, Maine died at age 68 on June 5,
2021 after two nights at Northern Light Eastern Maine Medical Center in
Bangor. Greg had lived a decade with a cancer that cruelly rim-wracked his
body but never touched his soul or left him jaded, did not blind him to beauty,
and could not steal away his awe of God. How can a person quantify the life
of Pastor Greg Schors, a life that, by medical standards, should have ended
years ago? Greg expressed no fear of death to the end, joyfully anxious to
meet his Heavenly Father. Greg insisted that the church picnic “SHINDIG!”
planned for June 6 at his house must go on even if he died. We carried on.
Born July 18, 1952 in Willimantic, Connecticut, Greg was the youngest son
of Harry and Gloria (Porter) Schors. Of Russian descent, Greg was baptized
at Holy Trinity Russian Orthodox Church in Willimantic, but attended
Congregational Sunday School classes in tow of big sister Susan. A building
contractor, Greg’s father would typically buy a tract of land, build the first
house for his large family, and build a street of homes around them. Greg
was a wild child who took everything he did to extremes, ending his schooling
after eighth grade. When he was 17 years old, Greg enlisted in the Army.
After completing trainings such as Army basic and parachute school until he
reached age 18, off to Vietnam went Greg at his 18 th birthday, following his
two older brothers Harry and Tommy. In the Army, Greg participated in
many aerial missions with the 101 st Airborne Screaming Eagles.
During his teens, Greg had spent summers at camp fishing and boating on
Gardner’s Lake in East Machias with his family. After discharge from the
Army in 1972, Greg naturally headed for Maine. Tall and powerful, Greg
learned to cut wood and took jobs in Maine’s far-flung forests for various
logging companies with brother Denis, including a winter at Lobster Lake
logging camp while cutting for Great Northern.
Greg married Brenda Preston on January 30, 1973, but didn’t shed his
carefree behavior. When he once chanced to step back and think about his
escapades, Greg himself concluded that his future life story was highly likely
to read either ‘Followed God’ or ‘Died early’.
May 30, 2021 Verse read aloud by son-in-law Pastor Jesse Davis:
Philippians 2:10-11 “…that at the name of Jesus every knee should
bow…and that every tongue should confess that Jesus Christ is
Lord…”
Greg Schors publicly chose God, together with his wife, on May 16, 1976,
thereafter steadily threading his way to being known as Pastor Schors for the
rest of his life. As his family grew, Greg took over a carpet store in Machias
and laid floors all over the county. Greg built a new carpet, flooring, and
furniture store across from True Value, and added the Good Shepherd Book
Store annex. During the ‘70’s, Greg also worked at DW Small’s garage,
where he started to speak about the transformational power of God to
whoever would listen, leaving motorists with small ‘tracts’ introducing them
to God. Eventually, Greg was ready to preach the gospel of Jesus Christ. In
the 1980’s, Greg pastored his first church, Head of the River Baptist Church
in Cutler, where he built a large addition onto the Church and initiated Faith
Promise, supporting missionaries of the world. During that time, Greg
traveled to Harbin, China on a missionary trip with Herb McLean. Greg
became Pastor of the Holmes Bay Baptist Church in 2005, totally re-doing
the church inside to provide for the comfort of parishioners, including little
ones.

In May, 2004, Greg received his bachelor’s degree from UMM and
became a licensed alcohol and drug counselor (LADC), working in local
agencies. He also worked in Washington County Jail as a correctional
officer. A hard-scrabbler and barterer to the very end, Greg was ALWAYS
looking towards a new project, usually associated with lumber and building.
Schors family reunions were big and LOUD. To the family, it was pure
exuberance and the joy of simply being together, once again re-hashing (and
often re-editing) old family stories, and reveling in laughter and food. Greg
respected his ancestors, and family gatherings included all generations. Due
to repeated storytelling by Harry Schors (born in NY, NY) and Uncle Sam
(born in Siberia) at Schors reunions, Greg’s siblings were able to retain and
repeat memories of their grandparents. Resilient stock from Russia, Onufry
and Katherine Schors emigrated to NYC before the Russian Revolution broke
out, thereafter moving to Andover, Connecticut to farm.
Who was Greg, and what did he love? Greg served the Lord first and
foremost. He loved his congregants in both churches and loved sharing the
Gospel, gently but persistently, with anyone who wanted to listen. Greg led
many to the Lord and influenced many more to seek the Gospel. His Bibles
were highlighted and re-highlighted until the pages looked like rainbows.
Greg loved his children Ricky, Jeremiah, Kristi, and Rebecca, his supportive
wife Brenda, his home and yard, complete with a big garden with neatly
carpeted aisles (yes, old carpeting from re-carpeting jobs)… they centered
his life. Greg loved to take his children camping, boating and tubing, and on
vacations.
Time passed, tragedies happened, grandchildren came. Nearby
grandchildren Lauren, Brooke, and Luke, followed by Elena, were treasures
in Greg’s eyes. Greg’s grandson Brandon Schors became like another son to
him. Everything the grandkids were involved in from ball games, school
events, art projects, he was a part of and was always present. Smart dog
companions Hunter and Libby stayed by his side. The family agrees that
Greg probably felt the very closest to heaven when headed for Hog Island on
a sunny day in his small motorboat with hip boots on and clam hoe ready to
dig low tide. During his last three years with cancer, Greg loved vacationing
in Aruba, Jamaica, and Ft. Lauderdale, Florida on trips planned by daughter
Rebecca, returning home the last time just weeks prior to death.
As Greg’s cancer advanced, he happily mentored and turned the
leadership of the church over to his son-in-law Jesse Davis in 2015. Wife
Kristi Davis took over the ‘unseen’ work that makes a church service run
smoothly. However, Greg did continue to attend church right through his last
Sunday on earth. Greg was tender-hearted, sensitive, loved fiercely and
always strived to build others up. Daughter Kristi said her Dad made her feel
special, as if all things were possible.
Greg is survived by Brenda, his patient wife of 48 years; by his children
Ricky and wife Linda, Kristi and husband Jesse, and Rebecca and husband
Jhonder; by grandchildren Brandon, Lauren, Brooke, Luke, Elena, Elian,
and Adriana; by siblings Susan and husband John and close brother Denis
and wife Jean, and step-sisters Carole, Cheryl, Bea, and Sandy, and by many
nieces, nephews, cousins, and in-law relatives, many of whom have graced
his table. Greg also leaves behind his ‘always there for him’ friend and
neighbor Peter Brandenese, brother in Christ Samuel Fang and Lily, people
who provided acts of kindness, The Emergency Room Department at Down
East Community Hospital, and many excellent medical providers, including

EMMC nurse Kara, who provided special comfort to family during Greg’s
final hours.
Greg was predeceased by many, including son Jeremiah, father Harry
Schors, mother Gloria, step-mother Louise, sister Ellen, brothers Harry and
Tommy, uncle Sam, niece Megan, sister-in-law Joyce O’Riley, mother-in-law
Lillian Preston Margarita, father-in-law Woodrow Preston.
Greg’s graveside service was held at Longfellow Cemetery on June 8,
followed by a gathering at Greg’s home by the ocean, and punctuated by a
massive lightning show during the night. Arrangements were made by
McClure Family Funeral Services, with special thanks to Jonathan McClure
for his compassionate care.
A donation made in Greg’s memory will help further Christ’s work in the
world may be made to either: Holmes Bay Baptist Church, 968 Cutler Road,
Machiasport, ME 04655, or to Living Hope Global Ministries (in care of
Samuel Fang), PO Box 487, Montgomeryville, PA 18936

II Timothy 4:7 "I have fought the good fight, I have finished the race, I
have kept the faith."
Read Less

To send flowers to the family or plant a tree in memory of Gregory Stephen Schors, please visit our Heartfelt Sympathies Store.

We encourage you to share your most beloved memories of Gregory here, so that the family and other loved ones can always see it. You can upload cherished photographs, or share your favorite stories, and can even comment on those shared by others. 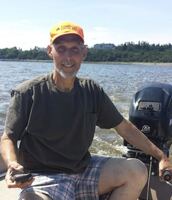