To share your memory on the wall of Herbert Cleaves, sign in using one of the following options:

Herb was predeceased by his father, his mother, and his beloved and train-chasing partner—his son, Ward. He is survived by his wife of 56 years Kathryn (Ramsdell) of Whiting. Their love and commitment to each other was strong from beginning to end. He is also survived by his daughter Christine Cleaves and her husband Douglas Zmorzenski of West Virginia and Whiting, Maine. He considered his grandchildren, Meghann Hill and Bo Brown one of the great joys of his life. He cherished spending time with them. He leaves them behind as well as Meghann’s partner David Lund and her children Lexa, Max, and Sam and Bo’s wife Ashley and their son, Oscar. His 4 great-grandchildren gave him much pleasure in his later years. Herb is also survived by his 2 brothers Gary and Martha Cleaves of Lascassus, Tennesse, and Art and Connie Cleaves of Wayne, Maine, and his sister, Ellen Cleaves and her husband Malcolm Hare of Westmanland, Maine. These 3 younger siblings always looked up to their older brother. Herb also is survived by several cousins, nieces, and nephews.

He attended early grades in one room schoolhouses and then graduated Salutatorian from Van Buren High School in 1957 and went on to study at the University of Maine in Orono, Aroostook State Teachers College (UMPI), the University of Colorado, and at Farmington State Teacher’s College, where he graduated with a Bachelor of Arts in History and a minor in English. At the end of the semester in Colorado, Herb flipped a coin. Heads he would hitchhike his way to Alaska to explore and tails he would hitchhike his way home to Maine. The coin landed on tails, and he returned home. He taught school briefly at Lubec High School where he met his beloved wife. Herb’s love for journalism and truth-telling began in high school and followed him throughout his college years. It defined his career in journalism. His career with the Bangor Daily News (BDN) spanned over 25 years. There he worked as a staff reporter, Bureau Chief (Pittsfield, Maine) and finally as an editor in the Bangor office.

After his retirement for the BDN he went to work for the Down East Coastal Press where he was a staff report and wrote an editorial column, “Flotsam and Jetsam.” He often wrote about his love for his family within the text of these articles. His ability to create visual pictures through his writing was uncanny. His vocabulary suburb, yet his humility remained stronger than his gift with the English language. Herb became a published author with one history book about the Bangor and Aroostook Railroad. His long desire to publish a novel came to fruition with his book “High Green,” unfortunately after years of trying he was too sick to acknowledge its publication.
Although writing proved to be his main source of income, Herbert’s true passion, rivaled only by his love for family, was his love for the railroads. He knew the history of all Maine railroads and took such pleasure in following in the footsteps of his father as a true railroader. Herb spent some years working for the Bangor and Aroostook railroad, mostly as a station agent. His memorabilia and pictures from the B&A and other rail systems remain extensive. He never tired of sharing the stories and his knowledge—always in a story-telling setting. The delight he and his son, Ward, took in chasing down the sound of a train whistle remains a happy thought for his family.
Herb loved the state of Maine but had a special fondness for Aroostook and Washington counties. He would be happy in either place. In Aroostook, the Haynesville woods (birthplace of his father) would always call to him. and in Washington County his heart was fond of Lubec and Campobello Island. His taste in food—followed his love of the counties—Aroostook County potatoes and Washington County lobster stew.
From the time Herb was old enough to move around, he was a free spirit. He sometimes described himself as being a square peg being whittled by society’s norms to fit into a round hole. He never fully allowed that to happen. He will be remembered as a man with integrity, strong convictions, love for family and a respect for his State and more importantly his country.
Services will be held at the gravesite on Wednesday, June 2 at 200pm. Herb will be laid to rest at the Corey Cemetery in Lubec. In leu of flower, in honor of the memory of Herb, and his strongly held belief in truth in journalism the family requests individuals reading journal articles hold authors to a highest degree of integrity while reading the material and acknowledging biases that may be in place.
Read Less

There are no events scheduled. You can still show your support by sending flowers directly to the family, or planting a memorial tree in memory of Herbert Arthur "Herb" Cleaves.
Plant a Tree

We encourage you to share your most beloved memories of Herbert here, so that the family and other loved ones can always see it. You can upload cherished photographs, or share your favorite stories, and can even comment on those shared by others.

Plant a Tree in Memory of Herbert
Plant a tree 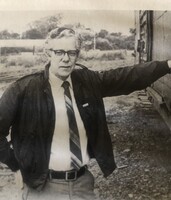