To share your memory on the wall of Clinton \"Peanut\" Gardner, sign in using one of the following options:

East Machias - Peanut passed away at home peacefully on January 28, 2021, at the age of 91 with family by his side. He was born in East Machias on October 19, 1929. He graduated from Washington Academy in... Read More
Clinton “Peanut” Gardner, Sr

East Machias - Peanut passed away at home peacefully on January 28, 2021, at the age of 91 with family by his side. He was born in East Machias on October 19, 1929. He graduated from Washington Academy in 1946 and began working full time at Archibald’s where he became the owner/operator in 1978. Some of his many accomplishments include being a part of the East Machias Volunteer Fire Department starting in 1946, where he later served as chief for over 30 years. In addition to this, he was Town Fire Warden, Tax Collector, and Treasurer at WA for over 20 years,and to have the new tennis courts named in his honor. He was always there for anyone day or night and was the town “go to guy”, even if he had to get up in the middle of the night to help someone who had run out of gas. His love and pride for the town of East Machias and residents was evident in the many roles he played during his life long residency. He was a hard worker who spent every day and endless hours doing for others and providing for his family.
Peanut could always be found at the WA basketball games including the Bangor Auditorium tournaments. He could also be seen in his many modes of transportation including his Ford trucks, green Model T, “Big Job”, tractor, 4-wheeler, and his side-by-side. Peanut enjoyed the little things like spending time with family, the Red Sox, fishing, and riding on the trails. You could still see him coming down the hill to get the paper and coffee, even in his last few months. He was the best Husband, Dad, Grampy, Bampy, Bamp, and we will miss his smile, his giggle, his unending patience, wise words and Thanksgiving day gravy. He was the solid rock of the family who could be relied upon for anything, we always knew he was there for whatever we needed.His greatest joy was his family and being home, and in the end that was all he wanted.

His family is grateful for the exceptional care he received at Sunrise County Dialysis in Eastport and Down East Hospice.

Services will be announced at a later date in the spring/summer . In lieu of flowers, donations can be made to the East Machias Fire Department, PO Box 209 East Machias,ME 04630
Arrangements are in care of McClure Family Funeral Services, Machias. Condolences and memories may be shared with the Gardner Family at www.mcclurefamilyfuneral.com
Read Less

Print
To be announced later in the Spring or Summer

We encourage you to share your most beloved memories of Clinton "Peanut" here, so that the family and other loved ones can always see it. You can upload cherished photographs, or share your favorite stories, and can even comment on those shared by others.

Posted Feb 07, 2021 at 05:45pm
Deepest sympathy to the family -- Peanut was indeed a fixture in East Machias and the surrounding area and he served his community well. He will be greatly missed.
Comment Share
Share via:

Posted Feb 04, 2021 at 09:01am
He was an exceptional person. When I think of the town of East Machias, he always pops into my mind. Rip..
Comment Share
Share via:
PC

Posted Feb 04, 2021 at 07:04am
So, so many memories with Peanut. He was a good friend of my fathers, we were neighbors, he was like a second dad to me as Patty and I were best friends. I went on almost all of their camping vacations. He gave Patty and I a ride to school every day of high school. He was a gentle, loving man and I'm sure he will be greatly missed. Love to you, Mary, Patty, Jack and Brenda!❤️❤️
Comment Share
Share via:
MS

Posted Feb 03, 2021 at 07:45pm
I have known this family since I was four years And I have been penpals and Facebook friends with Patty since I was four years old I spent so much time with Peanut and MaryThey were my second family my father has pictures that he sent them to me I just don’t happen to have any with me but I’m so delighted and blessed to have known you and tell my mother when you see her that will be along in Our own time💔
Comment Share
Share via:
CH

Posted Feb 03, 2021 at 06:36pm
My condolences to the family...I remember Peanut from my younger years... He and my mom are almost the same age. RIP
Comment Share
Share via: 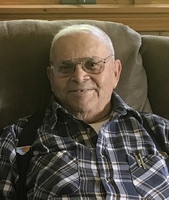